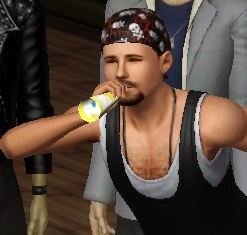 So I’m minding my own business (well actually it was Zach’s business, I think, but anyway…) when I noticed that Cierra was looking a bit orange. I maxed her motives but that didn’t take care of the problem so I bopped over to see what was wrong. She was sad. Why was she sad? She and her husband had just recently moved into a new house and were all set to start a family together. She was sad because she had witnessed a death.

Whose dead?! I don’t recall any personality notices about fights or broken objects that could result in death. In fact, I had just added a new caste for my favorite sims that actually reduced their chance of being killed by random activity . . . Where’s Shaun? . . . Cierra’s husband is suspiciously missing. And bears a striking resemblance to the blackened portrait in her brokenhearted thought bubble. This is NOT good. But it gets worse. There weren’t any notices of any kind of activity that woulda/coulda/shoulda killed a healthy young sim. I pop over to Vlad’s brain to check his assassination record — earlier he had trotted across the street to engage in some risky business with Cierra but it was called off when her husband walked in the door. Then Shaun and Vlad exchanged words and Vlad slapped Shaun silly. Perhaps Vlad, with his elevated assassination skill, might have taken it a bit further after I sent him home — but no, Vlad’s record remains at 32. He hasn’t taken the life of a sim since he returned from Uni.

Suddenly I had a brilliant idea — I’d send Cierra over to Grim’s house and see if he’d be nice enough to resurrect Shaun. Long story short, Grim agreed and Cierra got her husband back. As an infant. Yeah, that’ll keep her satisfied. The girl has an appetite for grown up activities. Guess it’s a good thing she works for the gigolo and only moved across the street from her boyfriend’s house.

The bigger question remains. . .
Who the HECK killed Shaun?! I ran the MasterController / Log Names function to find out who in town has the assassination skill and it gave me 8 possibilities besides Vlad. Two of them aren’t actually in this world, but that still leaves 6 to choose from: Cyndi Brady-Schlick has a record of killing 2 sims so far (though most likely she was just on the same lot when they died); Cierra’s dad, Chance, has 3 kills in his log — one of which appears to have been Cierra’s mom who died when a vigilante set fire to something in her house; Joey, one of the Family’s top dogs, has 16 kills including one listed as being an actual family member (I don’t recall ever having him kill someone in his own family) and his most recent kill (whenever that was) wasn’t witnessed; Ekaterina Schlick (Zach’s daughter) only has the skill because she had the misfortune of being on the same lot when a sim died of unnatural causes; Shaun Jr. (Shaun’s great-great-grandfather… don’t ask) sent one elder on to his final reward; and finally, Brianna who is still at level 0 because she’s also had the misfortune of being on a lot and active when a sim died of unnatural causes. So who was it? Joey, Chance, or Cyndi? None of them fit the profile of an autonomous killer. They’re all nice…….. good, even.

Just thought of something — the last time I saw Shaun alive, he and Chance were both at the Bistro. If there’s an ash pile with his name on it in the courtyard I just might have my killer! But to have done the deed in such a crowded place, it seems he should’ve been hauled off to jail….

So… I did go by the Bistro and look for an ash pile. There’s none to be found there, and none at the hospital to indicate Shaun may have gone there before he died. Actually, I went through the entire list of object stats locally, globally, and those counted as non-inventory and didn’t find an ash pile anywhere. Given the appearance of the portrait in Cierra’s thought bubbles, it looks like Shaun was cursed to death. Unfortunately, my three sims of interest in this case have all been given (yes, it was given to them rather than earned) high enough skill level to be able to do that.

Here’s where you, dear reader, come in:

I’m torn between moving forward as is and backing up a couple of saves and starting that day all over again. Or possibly even just taking the infant Shaun into CAS and aging him back up to YA.

Should I allow Cierra to raise her husband rather than his children (or maybe there could be some hanky panky going on with MasterController’s pollinate option or the Play with Genetics option at Grimmy’s house). She could live a nice life with Joey has her boyfriend-ish neighbor and Vlad checking in on her every once in awhile.

Or should I go to an earlier save for the do-over and count last night’s game play as an experiment to see how Grim’s Ghostly Manor works?

Or should I make Shaun a YA again without losing last night’s game play?

4 comments on “Whatever happened to Shaun IV?”