When I left you hanging over the edge of a cliff, Isaac Abraham was hanging between life and death. I had run to city hall to find out who had a death flower they’d be willing to give him, but when I tried to select him as the recipient of the flower it appeared that he no longer existed. While I was writing that last post it occurred to me to look for him among the dead — the default filtering would have only looked for his name among the living. This time, rather than using Dennis as the donor, I chose Isaac’s nephew Zach. Sure, Dennis just married into the family but Zach is family. It just made more sense.

Anyway, short story long, Isaac was listed among dead and the donation went through. I went back and unpaused the game feeling so much better about what was going to happen. As a crowd began to converge on that little stretch of balcony, Elvira decided to play the heroine — she pulled out a fire extinguisher and put out the fire. But it was a classic example of too little too late. Isaac was gone.

With his usual flare, Grimmy arrived and began the last rites. When he summoned the ghost of Isaac to stand and give account of himself, Isaac offered him a flower. The not-so-Grim Reaper accepted the gift and returned Isaac to the living — or as close to that as a vampire can be.

With Isaac now free to return to his wife and children, I return to his brother and the task of trying to arrange a girlfriend for him. Poor Jacob has never had a girlfriend that I can remember — which is really weird for any Schlick, but especially an Abraham-Schlick cross. Then again, in a town where most of the population is related to either the Schlicks or the Abrahams, and your twin brother is Isaac, maybe it isn’t so strange after all. It would be sweet if Jacob and Chantilly can hit if off — and if he can look past her career choices and see the strength and character of a girl who’s determined to keep her family together after the horrific deaths of her parents. 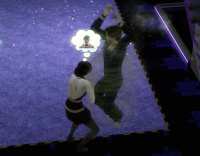 What the…??? The camera just jumped again! This time it jumped downstairs — to Isaac and Elvira. Not again! Ugh. This time poor Isaac is turning to dust. Curses, Elvira!!! I guess it was just meant to be. Isaac isn’t going to make it home tonight. Whaaa.

Grimmy returns to The Grind and once again begins last rites. Elvira has won. Vlad has lost child #13. 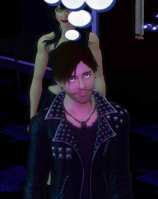 Foiled again, Elvira! Isaac has won this showdown of good vs evil.

Wait? What? Isaac is giving Grimmy another death flower? How’d he get two??? I’ll have to look into that later but right now I’m HAPPY! And Elvira is being sent home immediately.