Last time we left off with Moe finishing up his first term at Sims University and getting ready to head back to Barnacle Bay. Alone. All by himself. Back to his lonely little fishing shanty. Without his girlfriend, Ashley. So, let’s get on with the story. He was picked up in front of the frat house by the Port-a-Party truck (yeah, me too, I always want to say Port-a-Potty) and mysteri-magically transported back to his island home. Equally mysteri-magical was that he arrived in front of the Port-a-Party warehouse. There was no Port-a-Party warehouse when he left. I was also rather surprised to discover that Mick’s Master Kareoke and the Flying V Coffeehouse had sprung up like mushrooms while we were gone. All three venues were placed without my knowledge (actually when asked if I wanted to place the Showtime venues I quite specifically said “No!”). They are a serious blight to the landscape. But whatever, there they are and since this is just a test game I’m not gonna get all fired up over it.

Shortly after being dropped off at his home the local Llama arrived with a basket of goodies in hopes that Moe would enroll for a second term. The Llama? He (or she) is the school mascot. Moe graciously accepted the basket and grabbed the aptitude test. I’d forgotten to have him do this part the first time around, knowing that an intern at the hospital would want a degree in medicine. He scored very well in several areas, just not in Science and Medicine. Ok. We had some work to do before sending him back. Off Moe went to the science lab to take a class in gardening. And then another class in science. And then a couple cheats to boost his skills because he still wasn’t scoring high enough on the aptitude test to graduate in two weeks. That was critical. This was a test game. I didn’t want to be tied to it forever. When he finally scored high enough to qualify for some extra credits and graduate in two weeks, I finally agreed to let him re-enroll. Soon the Port-a-Party truck was back to pick him up and carry him off to the wonderful world of University Life.

This time around I decided to let Moe live in the dorm with his girlfriend. It seemed like it might make it a little easier for their relationship to blossom if they actually got to see each other once in awhile. Sadly, without StoryProgression to drive the inactive sims, she really didn’t do much of anything for herself. She didn’t even bother going to class. Ever. She and many of the dorm dwellers stayed there all day. All night. Contemplating their surroundings. On the other hand, her lack of initiative meant she wasn’t hooking up with other sims behind Moe’s back — I’ve heard rumors she earned a bit of a reputation in other games.

For the second term I gave Moe a motorcycle to help him get around in the bad weather. It wasn’t much of an improvement over the bicycle as far as dates were concerned though, but Moe and Ashley stayed in more this term. However, since they lived in the same dorm he didn’t get to use the “woohooty” text message any more. Darn.

Classes went along swimmingly. Moe hosted a few parties this time around. Dress code for his first kegger was sleepwear. The next party was a toga-clad bonfire. That was followed by a masquerade kegger after finals. Both of his juice keggers were visited by the police. Although notices appeared saying the parties were broken up, evidence says otherwise. Moe also hosted a bonfire party — something he had to do during the fall because for some strange reason you can’t light bonfires in the winter… when it’s cold… and a fire would be peachy. Go figure. The bonfire party broke up because he inadvertently let the fire go out. Twice. Yeah, it would seem only the game thought the fire stopped burning the first time. The second time was around noon the next day. At that point, I was ok with it. lol

The dorm was equipped with Parteus Maximus, so all of Moe’s parties lasted into the wee hours of the following afternoon. He also had 2 kegs in the dorm and a Juice-Pong table (I mean a table tennis table). Yet even with all that, Moe had time to visit the comic book store, the bowling alley, the movie theater, the convenience store, the drive-in diner (kind of a silly concept in a town where no one has cars) and attend parties at the sorority on a nightly basis. Except when the party was at his place, of course. Oh — he even managed to study, build a better blog, increase his social networking skill, and improve his standing in all three social groups. To earn a little extra spending cash, he occasionally posed for an art class. (And if you believe he was only doing it for the money, I have a lovely piece of oceanfront property in Appaloosa Plains I’d like to sell you.) Moe was a busy boy.

Moe somehow managed to keep his academic performance going strong. He got in a lot of studying, and of course attended all his classes. As second term rolled to a close Moe aced his finals. Not that I expected anything less from this boy. That last kegger he threw Friday night after finals, though visited by the police on Saturday, was only broken up by the call to attend the graduation ceremony. He would have only one more night in the dorm; one more night to party; one more night with Ashley. With Sunday came the truck from Port-a-Party and the inevitable trip back to Barnacle Bay. Once again Moe would be traveling alone. Back to his lonely little fishing shanty across from the day spa. Thank goodness for smartphones and text messaging! On Monday Moe invited Ashley to come for a visit and on Tuesday (or maybe Wednesday) they got married in a private ceremony at the Summer Festival. 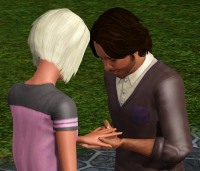 What shall become of Moe and Ashley? Stay tuned… 🙂