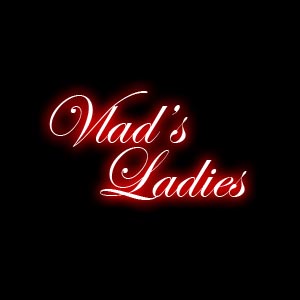 Elvira Slayer ~~ Vlad and El were married (and divorced) shortly after their arrival in Sunset Valley. With the help of Twallan’s personalities mod (and Vlad’s work as a gigolo) their relationship has flourished. They now have 4 sons. 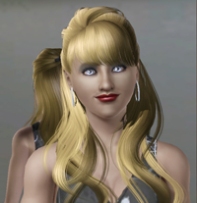 Sarah Abraham ~~ Created as a teenage vampire for a game in Bridgeport then added to Sunset Valley. She and Vlad have 5 children together, including 2 sets of twins. 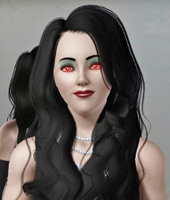 Annie Kassanova, deceased ~~ Born and raised in Sunset Valley, the daughter of Tommy and Mallory Oseguera. She was a vampire at birth but was slain as a young adult. She fell head over heels in lust for the awesomeness of Vlad and married him just as quickly as she could make it happen. The marriage was annulled almost as quickly, but not before she became pregnant with twin daughters, Dasha and Daria.

Kelly Carpenter, deceased ~~ A recent arrival to SV2E, Kelly quickly caught the eye — and heart — of the Dracul. During their first date he was so smitten he popped the wish to marry her. The date hasn’t been set.

Ashley Corono, deceased ~~ One of the original sims from Sims University. Vlad had a good time getting to know her while he was at school. 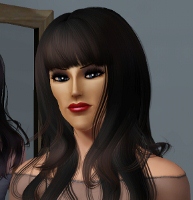 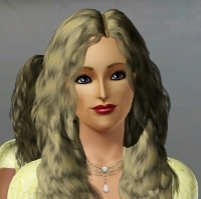 Charlotte Wilson (Vlad + Sarah) deceased; Charlotte was a beautiful woman, but evil as the day is long. She seemed to be headed down the path to some interesting stories… until Elvira had other ideas. Prior to her death, Charlotte had married/divorced William Charming and gave birth to their daughter, Ava.

Daria Schlick (Vlad + Annie) *twin*, deceased; Daria was a budding inventor until that horrible night when one of her projects went up in flames. She died of immolation.

Dasha Hall (Vlad + Annie) *twin*, deceased; Dasha survived into adulthood and married a military man, Gino Hall. Together they had one daughter, Olivia. Dasha was a sweet, beautiful young lady, not unlike her mother. Her untimely demise came at the hands of her father.

Joey Schlick (Vlad + KerryAnn); Joey isn’t very much like his dad — except where the ladies are concerned. Even as an unproven teen his potential was obvious… and he was named to the role of Town Gigolo. He has served his community proudly. Joey married his high school sweetheart, Hannah Hayes, and they have 3 sons together. They inherited Joey’s little brother, Adam, when their mother passed away. 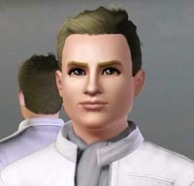 Elijah Slayer (Vlad + Elvira) *twin*, deceased; Elijah was the good twin (literally, born with the Good trait). Even in separate cribs he and his brother didn’t get along. When he got his high school sweetheart pregnant he promptly married her. It was the right thing to do. She soon moved in with his family and later gave birth to twins, a boy and a girl. Nakia has passed away, leaving Elijah as a single parent. He recently packed his kids and moved out of his mother’s house.

Randy Slayer (Vlad + Elvira) *twin*, deceased; The evil twin. He got the trait from both of his parents. He died while a teen as the result of a frackus with a local Helsing. Or maybe it was a slayer. Well… it was someone who didn’t like vampires. 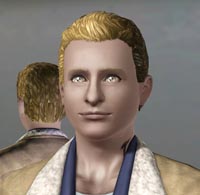 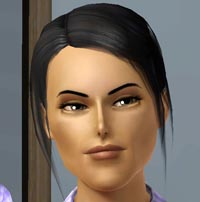 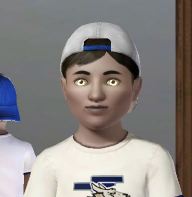 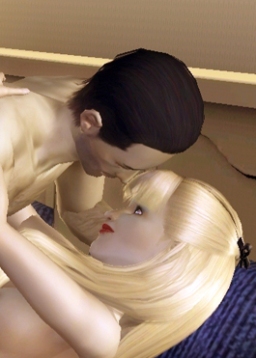 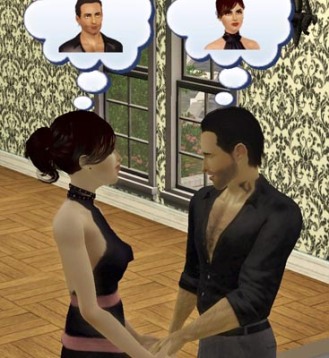 Aww.. How sweet. You’d never know she killed him twice. 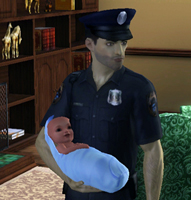 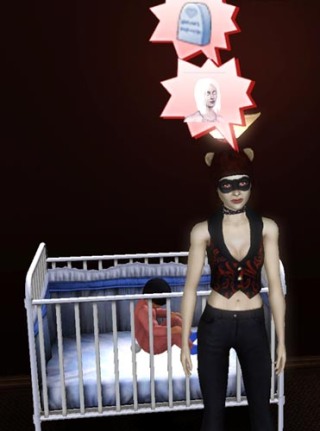 Elvira with young Sergei, mourning the death of her daughter-in-law, Nakia. 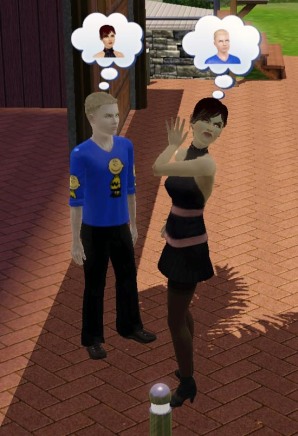 El and Elijah. These two never did get along. She’s evil, he’s good, it was inevitable they’d have problems.

Isaac playing with his umbrella. Ok, actually he was just putting it away but it looks like he could be auditioning for Dancing in the Rain. 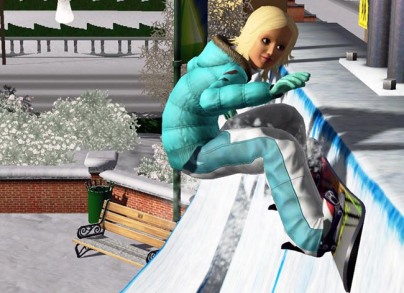 Celina hard at work on her snowboard skills.

She’s not half bad! 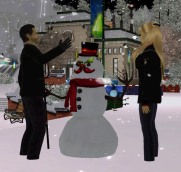 Vlad and Sarah building an evil snowman in Central Park. 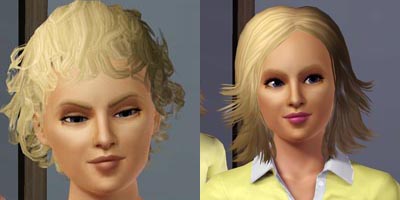 Celina’s before and after pics. Somewhere along the way her big eyes shrunk — then needed to be fixed immediately.

Michelle’s before and after pics. She suffered the same form of degeneration with her eyes and received the same treatment.

Vlad and Kelly, the day they met — having a water balloon fight behind the diner. 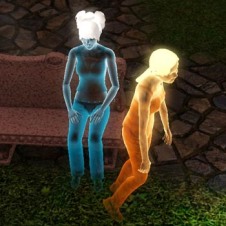 Dasha and Daria reunited at the Happy Haunts Cemetery. 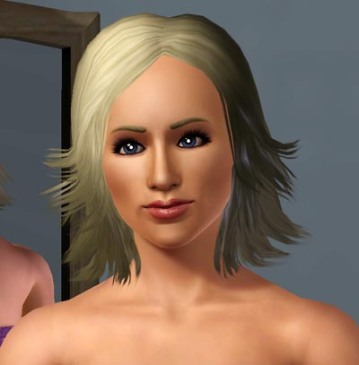 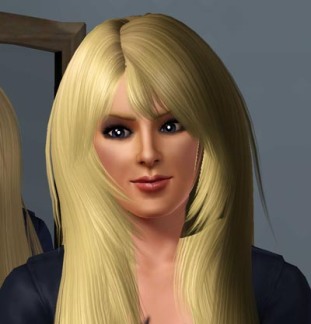 Both Celina and Michelle developed a hormonal imbalance when they aged up. Thanks to advances in CAS science, both ladies were able to be cured. 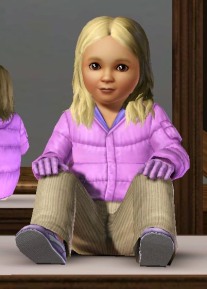 Joey’s job in The Family requires him to sharpen his skills as a hit man. Here he took out an obtrusive paparazzi. Lucky for him there were no witnesses to report the crime.

Some guys are just hot. Hot blooded, I mean — you know, to be able to go outside in the snow without a coat on… 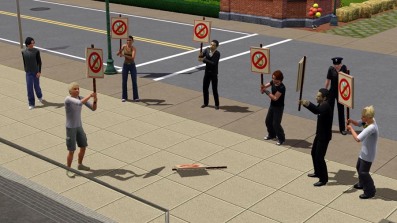 One fine Saturday morning several of the Schlick family men gathered in front of city hall. Perhaps they’re opposed to blood diamonds? Or is it the new arranged marriages allowed by StoryProgression Phase 15? 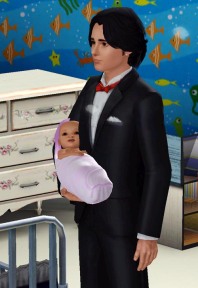 Zach Schlick and the first child his genes were involved in making. The community needs more non-Schlick kids, but that doesn’t mean they can’t look like Schlicks… right?